ssHMM is an RNA motif finder. It recovers sequence-structure motifs from RNA-binding protein data, such as CLIP-Seq data.

RNA-binding proteins (RBPs) play a vital role in the post-transcriptional control of RNAs. They are known to recognize RNA molecules by their nucleotide sequence as well as their three-dimensional structure. ssHMM combines a hidden Markov model (HMM) with Gibbs sampling to learn the joint sequence and structure binding preferences of RBPs from high-throughput RNA-binding experiments, such as CLIP-Seq. The model can be visualized as an intuitive graph illustrating the interplay between RNA sequence and structure.

ssHMM was developed for the analysis of data from RNA-binding assays. Its aim is to help biologists to derive a binding motif for one or a number of RNA-binding proteins. ssHMM was written in Python and is a pure command-line tool.

Below, you find an example output of ssHMM. After training on an RBP dataset, the model can be visualized as a graph. Each of the HMM states, including the start and the end state, is represented by a box. The states are arranged into rows and columns where the columns represent the motif positions and the rows represent the five structural contexts of RNA. Each state's emission probabilities are visualized as a sequence logo. The relative heights of the nucleotides in a stack represent their emission probabilities. The total height of all four nucleotides is scaled according to the information content of the state's emission distribution. The transition probabilities between the states are visualized as arrows. The thicker an arrow between two states, the more likely is a transition between the two. To reduce clutter, no arrow is shown if the transition probability is less than 0.05. The RBP visualized below prefers the sequence motif UGGAA and primarily binds stem regions of RNA. 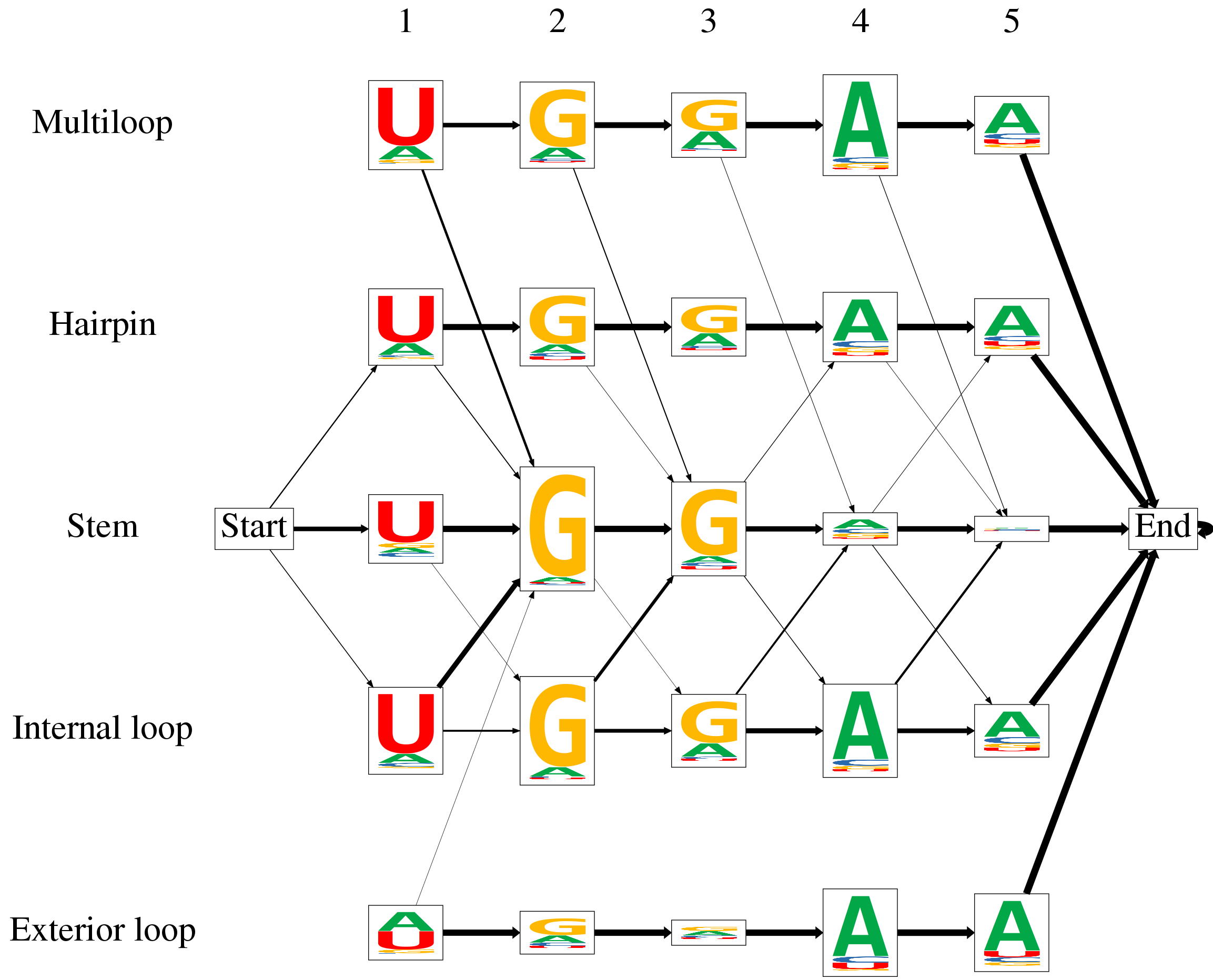 ssHMM can be installed manually as a Python package or (more simply) as a Docker image. Check out our documentation: http://sshmm.readthedocs.io

If you experience problems or have suggestions please contact me (see below). Alternatively, you are welcome to create issues or pull requests.

The project is licensed under the GNU General Public License.